Blood on the Sand, Blood in the Sea. Of Courage and Treachery on Libya's Shores 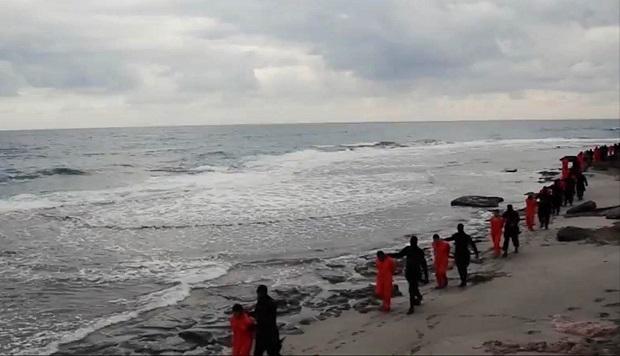 "One incurs no blame in giving up one's life that the good and the right may prevail.
There are things that are more important than life."
(Hexagram 28, Line 6, Preponderance of the Great. I Ching, Wilhelm/Baynes translation)


I am no stranger to Libya. I spent most of the third year of my life travelling with my parents between Tripoli and Benghazi. And long before I had entered this world, my father, together with many other young Italian men, had come to know Libya's towns and deserts very well. Most of them had taken leave of their families because there was no work to be had in their towns and villages. The wages they earned helped to sustain the lives of mothers and fathers, brothers and sisters back home.

The world in which those young men lived is virtually inconceivable for most who live in the so-called developed world today with its fully charged and fully wired ways. The spaces in which we live are now awash in a chaos of invisible energies beamed by over 1,100 communications satellites orbiting the earth. They endlessly transmit our voices, our images, our texts, our financial transactions. They direct the movements of fighter jets and devastatingly lethal missiles.

Yet even in the midst of the technological power and control that dominates the times, there are some things that have barely changed. Among them is the deep poverty in which many continue to live despite the good times and fast living that the western world distractedly pursues. Over three billion people - nearly half of the world's population - live on less than $2.50 a day. This would not even cover the cost of a morning coffee.

Many decades after the time that my father worked on construction sites in and around Benghazi, Libya remains a place where both young men and older men from impoverished families continue to look for work. Egyptian men in particular. But Libya has become a far more dangerous place than ever it was before, as we so graphically learned in mid-February 2015.

Because a Few, by Fate's Economy shall Seem to Move the World the Way it Goes


Long before the attack on the Twin Towers in September 2001, the invasion of Afghanistan in October 2001, the Shock and Awe attack that preceded the invasion of Iraq in March 2003, the overthrow of Muammar Gaddafi in October 2011, and the ruinous dismembering of Syria that has been steadily progressing since March 2011, the game plan for the Middle East had already been drawn up.

The Project for the New American Century was formed in 1997. It gathered together many of the militarist hawks who would soon after form the inner circle of George W. Bush's presidency. It included such shadowy luminaries as Dick Cheney, Donald Rumsfeld, Paul Wolfowitz, Richard Perle and John Bolton. Within months of its formation, an open letter was sent to President Bill Clinton. The letter was signed by the core members of the group as well as carrying the signatures of an additional 30 political and military heavy-weights. The letter unambiguously called for the removal of Saddam Hussein from power: "What is needed now is a comprehensive political and military strategy for bringing down Saddam and his regime."

Its first formal declaration Rebuilding America's Defences was published in September 2000. The following comment appeared in that report: "[T]he process of transformation, even if it brings revolutionary change, is likely to be a long one, absent some catastrophic event like a new Pearl Harbour." The report also urged that the methods to be used to maintain US global hegemony should include the right to launch pre-emptive military strikes and the freedom to overthrow regimes deemed "hostile" to US interests.

The desired "new Pearl Harbour" event dramatically materialised within 12 months of releasing the report when the Twin Towers were brought down by two passenger planes that had been hijacked by 10 young men. Seven of the men were from Saudi Arabia, two were from the United Arab Emirates, and one was from Egypt. Within 24 hours of the 9/11 attack, both Donald Rumsfeld and Paul Wolfowitz had called for the overthrow of Saddam Hussein. Their moment had come and these men were determined to whip the horse as hard as they could.

The first stage of the program was enacted through the saturation bombing of Taliban positions in Afghanistan a month later. Rumsfeld, Wolfowitz and their inner circle patiently waited a further 18 months until Afghanistan had been sufficiently "subdued" and the American people sufficiently "persuaded" that Sadam Hussein was somehow behind the attack on the Twin Towers.

A torrent of missiles was unleashed upon Iraq on the night of March 19th 2003 in a spectacle that was broadcast and viewed as live "entertainment" throughout the western world.

By Dint of Slaughter, Toil and Theft


The invasion of Iraq was built on two lies. The first was that Saddam Hussein possessed weapons of mass destruction. The second was that Iraq had been a haven for al-Qaeda and that Saddam Hussein was in league with Osama Bin Laden. Al-Qaeda was non-existent in Iraq when the US-led attack commenced in March 2003. But within a few months, Abu Musab al-Zarqawi, a former Jordanian lone-wolf militant had sufficiently exploited the chaos in Iraqi society to gather around him a sizeable group of former Iraqi military commanders and assorted Sunni Jihadists. In April 2004, he formally pledged his allegiance to Osama Bin Laden and declared himself head of the newly-formed al-Qaeda in Iraq. Soon after, he released a video depicting an act of breath-taking cruelty which set a precedent that has been ritually re-enacted throughout the Middle East on numerous occasions since. 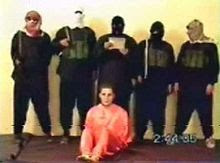 American telecommunications contractor Nick Berg was abducted in Baghdad by al-Zarqawi's men in April 2004. His headless body was found near a highway overpass near Baghdad on 8th May 2004. Three days later, a grisly five minute video was broadcast by an Islamic website. It showed Berg in an orange jump suit - a standard issue item for Islamic detainees in the notorious Abu Graibh prison near Baghdad. Berg was surrounded by five masked men. After identifying himself, two of the men held him down while a third - allegedly Abu Musab al-Zarqawi - beheaded him with a knife. A fourth man then read a statement that concluded with the following remark: "You will not receive anything from us but coffins after coffins . . . . slaughtered in this way." The sands of the desert and the shores of the Mediterranean have been awash with hand-drawn blood ever since.

Al-Zarqawi was himself killed in an air strike in June 2006. His fellow-combatant and senior aide Abu Ayyub al-Masri immediately stepped into his shoes. Within four months, al-Masri had succeeded in merging al-Qaeda in Iraq with a number of other Sunni insurgent groups and declared the formation of the Islamic State of Iraq, nominating the shadowy Iraqi nationalist scholar Abu Umar al-Baghdadi as its head. Both were killed in 2010. The reins were then taken over by Abu Bakr al-Baghdadi.

The invasion of Iraq by the US and its "coalition of the willing" not only enabled al-Qaeda to firmly establish a presence where it had not been, but ultimately created the conditions whereby a far more lethal entity was able to sink firm serpentine roots into the wracked and bloodied soil of Iraq and thence to spread its cancerous venom throughout the Middle East.

Over the past two years, ISIS militants have taken advantage of the chaos ensuing in Libya after the "successful" NATO campaign to oust Muammar Gaddafi, who was brutally murdered in October 2011. The presence of ISIS in Libya was dramatically brought to the attention of the western world in February 2015 when it released a shockingly graphic video of the beheading of 21 Christian migrant workers on the shores of Sirte in northern Libya.


On the night of December 27th, 2014, a group of Egyptian workers, all Coptic Christians, were abducted by members of ISIS from their quarters in Sirte, a coastal city situated mid-way between Tripoli and Benghazi in northern Libya. A week later, another group was similarly abducted. Their captors chose only Christian workers, releasing all Muslim fellow-workers who were staying in the same compounds. The Egyptians all knew of the dangers of working in Libya since the killing of Muammar Gaddafi. Before the Arab Spring which began in Tunisia late in 2010, two million Egyptian men were employed in Libya at any given time. For virtually all of them, such work represented a life-line for their impoverished families enabling them to have food on their tables and to provide schooling for their children. By late 2014, their numbers had dropped to 750,000.

Thirteen of the men who were abducted were from Al Aour, a village and farming community of a few thousand people situated three hours south of Cairo. For seven weeks there had been no word regarding their fate or the fate of the other men who had been captured. On Sunday 15th February 2015, ISIS released a video that confirmed the worst fears of their families. This highly produced film showed a group of 21 men being led single file along a rocky shoreline. The men were dressed in orange jump-suits similar to that worn by Nick Berg when he was beheaded by Abu Masab al-Zarqawi in Iraq 10 years beforehand. Walking behind each man was a black-robed masked ISIS militant of gigantic stature. This was all part of the grotesque theatricality that had long been favoured by ISIS in portraying itself as a ruthless super-human force to be universally feared.


The 21 men who were led along the Wilayat Tarabulus coast in Libya went knowingly to their fate. Each of them was offered their freedom if they renounced Christianity and embraced Islam. Each of them refused. Remarkable in this story is that one of the captives, Mathew Ayairga a worker from Chad, was not a Christian but had somehow been included with the 20 Coptic men. The original video aired by ISIS shows that he was given an opportunity to save himself. When asked "Do you reject Christ?", he replied unflinchingly, "Their God is my God."

The hidden story of the 21 martyrs is documented visually in the following short video clip, which is a highly moving collage of news reports, still images, and edited excerpts from the ISIS video. It offers a rare and precious experience of human faith and courage in an age that has been overtaken by the cult of ego, the pursuit of distraction and the collapse of depth. It provides a glimpse of the hidden pain of those whose lives have been shattered by inhuman cruelty wilfully inflicted on others. It points to the ultimate transience of human life. And it reveals the peace that can be carried within a man that will, in the fullness of time, find expression in a renewed humanity.

1. "Enemy of Enemies: The Rise of ISIL" is a superbly produced documentary that carries extensive archival footage of the peculiar sequence of political and strategic mutations that led to the formation of the Islamic State in its present manifestation. A significant part of the presentation centres around discussions between highly informed and articulate commentators, each of whom has participated intimately in the movements of events from the invasion of Iraq in 2003 to the present impasse.

2. The headers in this essay are drawn from E.A. Robinson's perceptive and prescient poem first published in 1916, "The Man Against The Sky", which offers an early reflection on the mental character of a civilisation gone awry. 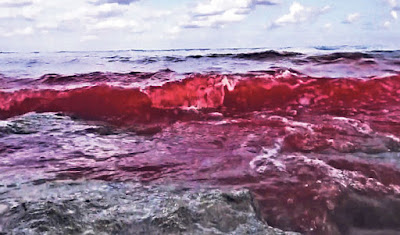