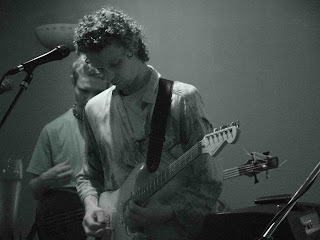 We have in the present age become desensitised to violence. It is glorified in movies, simulated in computer games, sanctioned in contact sports and casually glossed over in the blur of daily news broadcasts. Yet every act of violence can create psychic and emotional shock-waves that reverberate thereafter in the lives of those affected by it.

A Beautiful Bohemian. Remembering Darren Jones offers a sixth anniversary remembrance of the death by knifing of Australian musician Darren Jones who was killed in an unprovoked attack while returning home from the Victorian College of the Arts in the early afternoon of February 23rd 2006.

This audio presentation was developed through a series of depth interviews with 11 people - many of them fellow musicians - who were part of Darren Jones' intimate circle. It explores the effects of this shocking event on the lives of a community of artists and reflects the slow and painful process of healing that follows such an existential collapse.

The music heard in this program is drawn from recordings of several bands in which Darren Jones participated as guitarist and vocalist. It also includes three musical tributes composed and performed by Nico Di Stefano, Ben Kelly and Dan Licht . The track Blood Stain was composed and performed by fellow musician and friend, the late Heath King who was himself tragically killed in a road accident in September 2008.

This program was first broadcast on public radio stations 3PBS (Melbourne) and 3MDR (Emerald) in March 210.


A Beautiful Bohemian can be streamed using the media player above. A CD quality mp3 file can also be downloaded here.

A shorter half-hour version was broadcast on 360 Documentaries (ABC Radio National) in September 2010. It can be heard here.