Seeds of Hope for a Hopeless Wasteland 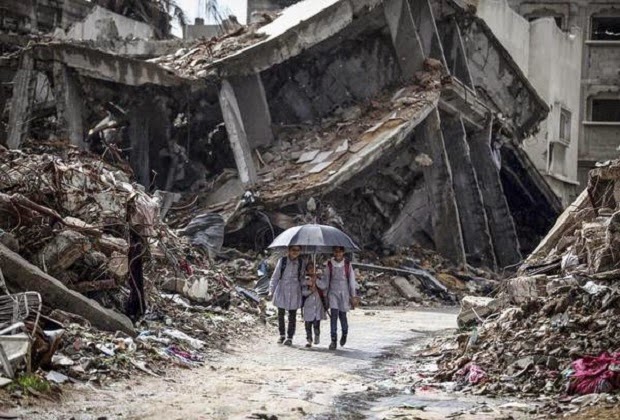 On July 8th 2014, Israel launched its "Operation Protective Edge" upon Gaza. Such assaults have become a regular part of the Israeli calendar in recent years. During the seven weeks of bombardment, 2,132 inhabitants of Gaza - 500 of whom were children - were killed. A further 11,100 were injured. Following the pattern of all such recent assaults, most of the casualties were civilian non-combatants. On the Israeli side, 66 soldiers and 5 civilians were killed, while 69 civilians were injured by rocket fire.

During the 7 weeks of bombardment, over 500,000 Palestinians - about a third of the entire population of Gaza - were driven from their homes, with most needing emergency food assistance. Over 270,000 civilians took refuge in the 90 United Nations schools in Gaza. Meanwhile, over 12,000 housing units were completely destroyed and a further 150,000 homes were damaged by bombs, mortar fire, and the actions of ground troops.

Seven months later, not a single home destroyed by the Israeli military in 2014 has been rebuilt.

Despite the apparent abandonment and near-universal silence regarding the situation in both Gaza and the West Bank, there are some voices who continue to call for justice and humanity to be exercised in the moral wasteland that Israel/Palestine has become.


For those with the Time, the Patience and the Will

A few days ago, the National Press Club in Washington posted videos of a conference examining the role of the Israel Lobby within the US in maintaining and supporting the deeply flawed policies that have riven the lives of both Palestinians and Israelis for many decades now. One of the panels featured Israeli author and activist Miko Peled, outspoken Israeli journalist Gideon Levi, and Palestinian/American lawyer Huwaida Arraf.

Miko Peled is of aristocratic Zionist lineage. His grandfather, Avraham Katsnelson was a prominent Zionist political figure and a signatory to the Israeli Declaration of Independence that established the State of Israel in 1948. His father, Mattityahu Peled was a member of the Israeli High Command and served as Major General during the 6-Day War of 1967. Immediately after the war, he urged that Israeli forces withdraw from all occupied territories. Constantly frustrated in his efforts, he resigned from the Israeli Defense Force within two years and devoted much of his energy thereafter to the cause of peace in Israel/Palestine. Mattityahu Peled was also a serious scholar who founded the Arabic Language and Literature Department at Tel Aviv University. During his latter years, Peled actively campaigned against Israeli militarism and the systematic violation of human rights by Israel in the occupied territories.

Gideon Levy needs little introduction. He has long been known and honoured as a clear-headed, courageous and deeply knowledgeable journalist for Haaretz, Israel's oldest daily newspaper. A week after the bombing of Gaza commenced in 2014 (by which time 200 people in Gaza had been killed and a further 1,000 injured), Levy wrote an article which called upon Israeli pilots to "refuse to take part in this death squadron." For this, he received many death threats. He was given the protection of bodyguards by his publisher. Gideon Levy carries a rare wisdom honed by deep familiarity with the violence that has seared the lives of both Palestinians and Israelis for decades.

Palestinian/American lawyer Huwaida Arraf was among a delegation from the U.S. National Lawyers Guild who visited Gaza in February 2009 to document the illegal excesses of the Israeli Defense Force during their Operation Cast Lead. She was also witness to the murder of 9 passengers on the Turkish ship Mavi Marmara by Israeli forces in May 2010 and was the chair of the Free Gaza Movement which organised the Gaza Freedom Flotillas.

This powerful recent discussion makes clear - yet again - the degree of collusion that has taken place between the State of Israel and most western governments in their disregard for the well-being and for the freedoms of Palestinians in Israel/Palestine.

1. In February 2014, Miko Peled gave a powerful and broad-ranging presentation at the Institute of Public Relations in Prague. He lays to rest the fairy-tale narrative of the creation of the State of Israel that western powers cleave to in their continued support for Israeli policies. As a result of such policies, 4.3 million Palestinian continue to live in refugee camps with little food, little water, little sewerage and poor nutrition seven decades - three generations - after they were driven from their traditional lands. Video of his talk can be accessed here.

2. On the 12th April 2015, the Association of International Development Agencies issued a new paper: "Charting a New Course. Overcoming the stalemate in Gaza." This distressing report highlights the degree of prevarication that has impeded all attempts to bring even the semblance of a liveable life to the men, women and children of Gaza after the devastation caused by the 7-week long Israeli assault during July and August 2014. A pdf copy of the report is available here.

3. "Slouching Towards Gaza" is an Integral Reflections production originally posted in December 2013. It offers audio collage of poetry, music, and contemporary commentary that addresses many lesser-known aspects of the history of Israel/Palestine. It includes the voices of Tanya Reinhart, Ilan Pappe, Richard Falk, Robert Fisk, Chris Hedges and Edward Said among others.


Slouching Towards Gaza can be streamed using the media player above, or downloaded as a CD quality mp3 file here.


With thanks to Binu Mathew of Countercurrents for making available Ludwig Watzal's article "The United States of Israel" which has prompted this further explication.
Posted by Vincent Di Stefano at 9:07 PM 2 comments: