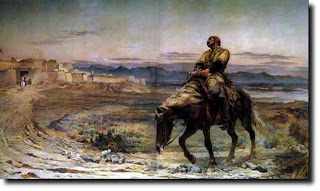 Elizabeth Butler
"Remnants of an Army" 1879

While Australian politicians finally begin to debate Australia's military presence in Afghanistan, we continue to remain largely in the dark regarding what is actually going on. Most of the information provided through the media emanates from "embedded" journalists writing in the shadow of their military protectors, or from "official" statements that serve to project government and military policies.

One of the major contributions of the American intellectual tradition - and there is one - to understanding the nature of social reality and knowing and understanding the lived experience of social groups was the development of a powerful form of social research at the University of Chicago by the early sociologist Robert Park during the 1920s. Before joining the Sociology Department, Park had spent many years working as a journalist. Rather than introducing his students to grand theories of social structure, Park sent them out to live with, eat with, talk with those whose lives they wished to understand. This approach enabled them to develop of a truly grounded understanding of the life of their respondents. It also enabled the transmission of that understanding to whoever might be interested.

The tradition of immersion as a way of knowledge continues to be realised in the work of independent journalists who are prepared to sacrifice their own security and safety in order to report on how life is lived in war zones and in places riven by conflict.

Investigative reporter Jeremy Scahill and independent film-maker Rick Rowley have recently returned from an "unembedded" journey through Afghanistan where they met with and spoke with numerous individuals about the current "surge" in military activities in Afghanistan. The story they tell is unlikely ever to appear in the pages of the Murdoch press or in the dominant media channels. They confirm and affirm the message transmitted by other independent journalists such as Robert Fisk and Nir Rosen, and Afghani political activists such as Malalai Joya.

According to Scahill and Rowley, the present wave of targeted killings and night raids carried out by special operations forces in Afghanistan appears to be spawning a new generation of radical militants and fueling - rather than quelling - popular support for the Taliban. In a lively discussion with Amy Goodman and Juan Gonzales, Scahill and Rowley confirm that only minute elements of the actual reality in Afghanistan are presented to Western audiences and that the little that does get reported projects a false perspective of what is actually going on. Scahill describe the government of Hamid Karzai as "corrupt to the bone" and in a recent article published in The Nation, reports that despite the troop surge and the intensified drone attacks and night raids, the insurgency appears to be spreading from rural areas to small provinces and district centers.

Billions of dollars continue to be poured into the black hole of Afghanistan both in military operations and the siphoning away of money allocated for civilian projects that never see the light of day. And yet there is no change in strategy short of injecting more troops, more military hardware, and more operations. Peace cannot be won by violence and destruction. And peace cannot prevail until the voices of wisdom, restraint and diplomacy begin to be heard over the clamour for more military hardware and troops.

Posted by Vincent Di Stefano at 9:38 PM No comments:

The Freedom to Choose

In Australia, individuals generally enjoy great freedoms in the matter of self-medication. This has not, however, been achieved without a certain vigilance and, on occasion, vigorous political action. There were a number of attempts made during the 1980s and 1990s to limit the availability of over-the-counter vitamins and health supplements. Strong public reaction to proposed changes in legislation resulted in a backing-down of those forces intent on controlling public access to these forms of self-medication.

There are similar battles currently being waged on the European front. In May this year, Theo Chalmers from Edge Media brought together two health activists in the UK in order to discuss present developments. Chalmers, an obviously sympathetic interviewer, chairs a two hour discussion held in May 2010 with Dounne Alexander, founder of Joining Hands in Health, and Robert Verkerk of the Alliance for Natural Health group.

Dounne Alexander gives an account of the difficulties she experienced in her attempts to produce and market a herbal product in the UK. According to her account, the product appears to have a rasayana-type restorative and regenerative action and a possible anti-tumour effect. Confronted by high levels of bureaucratic and administrative obstruction, and realising that powerful forces were operating behind the scenes, she started Joining Hands in Health as a public lobby group.

Robert Verkerk is an agricultural ecologist with a special interest in sustainable health care systems based on naturalistic rather than biomedical approaches. Verkerk is a highly informed and articulate presence who brings intelligence and discernment to the discussion. His discussion touches on matters such as vaccination programs, genetic modification of agricultural crops, the nature of natural medicines and his present contentions with the US Food and Drug Administration.

The discussion between Theo Chalmers, Douanne Alexander and Robert Verkerk has been conveniently broken up into 14 consecutive episodes which can be easily watched or listened to over a few days for those who may be interested in such matters. It is available here.

Thanks to Buzz Robertson for this lead.

Posted by Vincent Di Stefano at 5:46 PM No comments:

As a reluctant latecomer to cyberspace, I enter the blogosphere with some trepidation and to paraphrase Van Morrison, with no teacher, no guru and no method. Learning by doing has ever been the way. The intention behind Integral Reflections is to project a synthesis of the themes that find expression in the various pages of The Healing Project.

These include the will to healing at personal, social, spiritual and environmental levels, the valuing and explication of textual sources of knowledge from which intellectual and spiritual nourishment can be drawn, the maintenance of a watching brief on the currents that course through these days of escalating tensions and collapsing certainties, and the exploration of poetic consciousness as a transmitter of the deeper dimensions of human experience.

That's the idea anyway. Hopefully this blog will enable a more leisurely, less formal and more interactive engagement than has been possible so far through The Healing Project website.
Posted by Vincent Di Stefano at 1:11 AM 1 comment: