From Silent Spring to Seedless Summer. Industrial Agriculture and the Destruction of Honey Bees 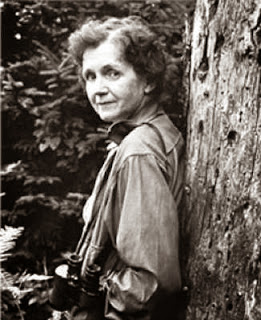 When visionary biologist Rachel Carson titled her enduring gift to a civilisation in decline Silent Spring, she was talking about the possible destruction of much of the bird life on earth through the use of agricultural poisons such as DDT. Rachel Carson was among the first to alert us to the phenomenon of biomagnification, the process whereby agricultural chemicals can progressively accumulate in body tissues as they move through the food chain. The ideas and the facts that she presented in 1962 were met with hostility and cynicism by both the chemical industry and agriculture bureaucracies. Regardless, things slowly began to turn. Within 30 years of the publication of Silent Spring, the use of chlorinated hydrocarbons such as DDT, dieldrin, chlordane and lindane had been banned by many governments. Yet Rachel Carson’s essential message has yet to be fully understood.

During the past seven years, over a third of the honeybee population in the US has been wiped out. Most recently, bee-keepers in the US reported an average loss of 45% of their hives during the 2012/2013 winter. This catastrophic development has been given the name Colony Collapse Disorder. The destruction of honeybee populations is not restricted to North America. Bee colonies throughout Europe have been similarly affected, with significant losses occurring in the UK, France, Switzerland, Italy and Germany. An estimated 90 billion honeybees were estimated to have died between 2000 and 2008. By the end of that period, French production of honey had dropped by 60%. 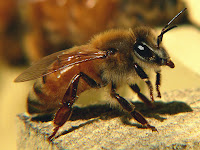 Honeybees are the great pollinators of the plant kingdom. Without them, flowers wither without producing fruit or seed. Bees pollinate one third of all the plant foods that we eat. Their activity has become economically crucial during this peculiar era of “industrial” broad acre agriculture where single crops are planted from horizon to horizon. In North America, blueberries, extracts of which are used by many practitioners of herbal medicine as potent circulatory restoratives, are now grown on farms that may be as large as 10,000 acres in size. Such industrial scale agricultural practises are necessarily served by industrial scale pollination services. It takes a lot of bees to pollinate such crops. For many years now, large numbers of beehives have been routinely transported over vast distances and strategically placed on these massive farms so that pollination can take place in the crops.

The California almond industry, which produces 80% of the planet’s almonds is entirely dependent
on transported bees for pollination. Nearly one and a half million hives - representing some 40 billion honey bees - are trucked into California every year to service the 60 million almond trees planted in Central Valley.

Such practices are also commonplace in apple and cherry orchards, blueberry farms, cotton plantations, and in the large-scale farming of vegetable crops in the US and in other parts of the world.

Commercial bee-keepers in North America continue to reel as literally billions of their bees simply disappear from their hives every year. A typical healthy hive can support from 30,000–40,000 bees. Affected colonies are empty of bees, but can still contained eggs, larvae and honey. Each year, billions of bees leave their hives never to return.

Opinions are divided regarding possible causes. Some have suggested that Colony Collapse Disorder is due to widespread infestation of bee colonies by Varroa mites and other parasites. Others say that viruses are responsible. Yet others are of the view that bees are no longer able to navigate through the haze of electromagnetic “smog” that has invisibly filled the earth’s atmosphere with a chaotic seething of short, medium, long and microwave radiations. 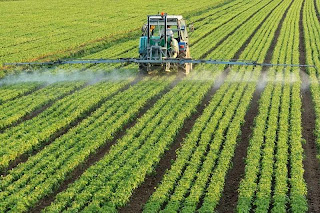 Many are convinced that the widespread use of pesticides has created the problem. What is absolutely clear is that bee populations are succumbing to present environmental stresses in a way that has not been seen before.

Much recent discussion has centred on the use of a newly synthesized class of pesticides called neonicotinoids, which are derived from the alkaloid nicotine. The German chemical company Bayer AG first produced and has been aggressively marketing imidacloprid, the first commercially used neonicotinoid compound, since 1991. Neonicotinoids are presently the most widely used group of insecticides in the US. Imidacloprid itself has become one of the best-selling insecticides in the world and at one stage was marketed in over 120 countries. But with the expiration of patent protection, cheaper generics became more widely available. Bayer chemists busied up and created a similarly active variant that they named clothianidin. Clothianidin was patented in 2003 and has been actively promoted ever since.

Both imidacloprid and clothianidin are strongly implicated in the widespread destruction of bee colonies in North America and Europe. These pesticides are commonly used both as leaf sprays and as seed dressings. Even when used to dress seeds, these chemicals are taken up by the growing plant and later appear in nectar and pollen when the plants begin to flower. Bees love nectar and pollen. The biomagnification of toxic pesticides as described by Rachel Carsen in 1962 remains as active today as it was when she wrote Silent Spring.

It was clear that trouble was brewing as early as 1999. At that time, the French government banned the use of imidacloprid as an application for sunflower seeds. Four years later in 2003, they banned its use on sweet corn seeds. That same year, the French government refused Bayer AG’s application for approval of the newly patented clothianidin. Early reports suggested that, like its parent compound imidacloprid, clothianidin was possibly highly toxic to honeybees. Bayer promptly took their business elsewhere. In a more recent attempt to limit the loss of bee populations in member countries, the European Commission has adopted a proposal to restrict the use of neonicotinoids for a two year period starting from December 1st 2013.

After the French ban in 2003, the US Environmental Protection Authority (EPA) formally approved the use of clothianidin for the huge American seed market. But the approval given in 2003 was conditional on Bayer AG undertaking studies of the effects of long-term exposure of honeybees to clothianidin. As bee populations in North America continued to collapse, many began to ask whether the studies were ever undertaken at all. After months of failed requests for the release of documentation relating to studies on clothianidin, lawyers from the non-profit environmental support group Natural Resources Defence Council filed a lawsuit against the EPA on 18th August 2008 under the Freedom of Information Act. A week later, the German environmental group Coalition Against Bayer Dangers similarly brought legal action against the Chairman of the Bayer AG Board of Management. The German group was acting on behalf of German bee-keepers who claim they have lost thousands of hives and possibly hundreds of millions of bees as a result of poisoning by clothianidin. Bayer of course fielded such attacks with the best lawyers money can buy. The sale of neonicotinoid pesticides at the time was fetching Bayer AG a massive 800 billion Euros annually.

A recent statement by the EPA makes it clear that business will continue as usual and that there will be no restrictions placed on the use of neonicotinoids by US farmers despite continuing losses of bee populations and the recent decision of the European Commission.

It has been well established that clothianidin is a persistent pesticide that is carried over in soil residues to be taken up by crops planted in the next growing season. A number of Italian studies have established that pollen obtained from seeds dressed with imidacloprid contains significant levels of the pesticide. And it is now well known that neonicotinoids act specifically as potent neurotoxins in insect metabolism. These potent chemicals interfere with bees’ ability to communicate with each other. Remember Karl von Frisch’s extraordinary work that revealed to us the sophisticated dance language that enables bees to tell each other where they can find supplies of nectar. Neonicotinoids also have been shown to affect bees’ memory and navigation capabilities.

A Labyrinth of Causes

The problem is not simply one of a collapse of honeybee immunity through routine fumigation of hives with pesticides and fungicides and the administration of antibiotics, nor of the malnutrition of honeybee populations through forced feeding in vast chemicalised monoculture farm properties, or the overworking of bees to the point of collapse. The phenomenon of Colony Collapse Disorder is yet another tragic manifestation of the systemic denaturation of soils and crops, and the intoxication of numerous life forms through the practices of industrial agriculture.

It is unlikely that a single cause is solely responsible for this catastrophic loss of honeybees in North America, Europe and elsewhere. What is clear however, is that regardless of Francis Bacon’s enjoinder 400 years ago that we should force nature’s secrets and extract her hidden bounties using whatever means human ingenuity can devise, there are limits that cannot be transgressed without serious, unexpected and often devastating consequences. 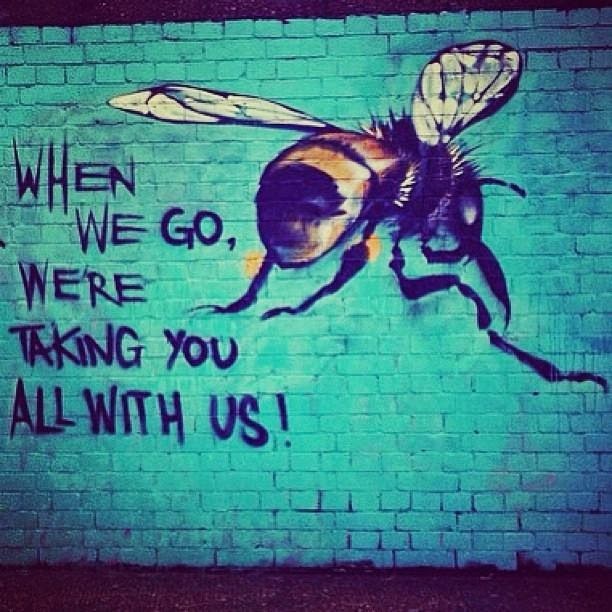 Posted by Vincent Di Stefano at 3:55 AM 2 comments: