Padre Pio of Pietrelcina. Healer for a Broken Time 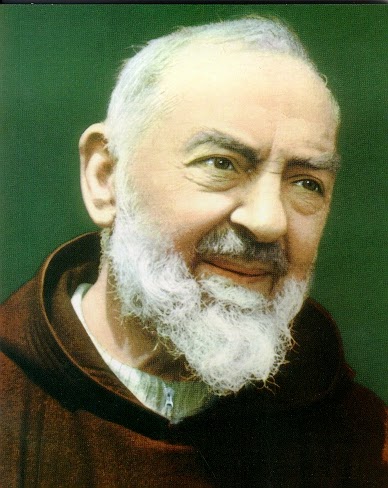 Padre Pio of Pietrelcina, the Capuchin priest who carried the wounds of the crucified Christ, embodied truths that have been stridently denied by many who would tell us how we are to think and what we are to disbelieve during these times of overwhelming power and overwhelming impotence. This remarkable man bore witness to the essential truth carried in the Christian understanding of the Incarnation, of the human embodiment of the living Christ. As one who bore the stigmata, the five wounds of the crucified Christ, Padre Pio projected historical truth. He shares this witness with such others as Saint Francis of Assisi, Therese Neumann and more recently, Emma de Guzman all of whose lives have shattered the illusory certainty of what has been considered the limits of the possible.

We pride ourselves on the cogency of the scientific knowledge and understanding that have enabled us to crack apart both atoms and atolls, leave flags and footprints on the moon, and map the structure of cellular DNA. This same pride has decreed that only through such methods as those sanctioned by science can we arrive at Truth. But despite our proofs and our powers, many aspects of the phenomenal world continue to defy scientific interpretation.


Sixty years ago, historian of science Thomas Kuhn described how our ways of thinking can become so fixed that we refuse to accept any evidence that cannot be explained or accommodated by our view of the world or the paradigm through which we interpret reality. Kuhn went on to describe the progressive accumulation of "anomalous" evidence that does not fit in to our way of thinking. This can often force a complete reassessment of the paradigm or model through which such evidence is interpreted. This process underlies the periodic revolutions that occur in scientific understanding.

There is no shortage of "anomalous" manifestation in the world. And there is much that occurs in the experiences of many that simply cannot be accommodated by a materialistic and rationalistic view of reality.

Padre Pio first received the stigmata, or the marks of the crucified Christ when he was in his twenties. Prior to that time, as a novice and young monk, he had engaged in a number of ascetic disciplines. His self-mortifications were extreme and, by today's standards, excessive. Despite the fact that every authentic spiritual tradition acknowledges the transformative power of ascetic practices, there are some who would consider them to be severe aberrations of spirituality. Yet the life and influence of Padre Pio as experienced by many during the course of his life showed him to be a man of great grace and unusual attainment. He has clearly walked a very particular path reserved for but few souls on the earth.

The activation of psychic energy through his spiritual practices unleashed demonic forces that literally made Padre Pio's life hell. He lived fully the paradox of the heavenly grace bestowed through the stigmata, experienced concurrently as indescribable and agonising physical pain. 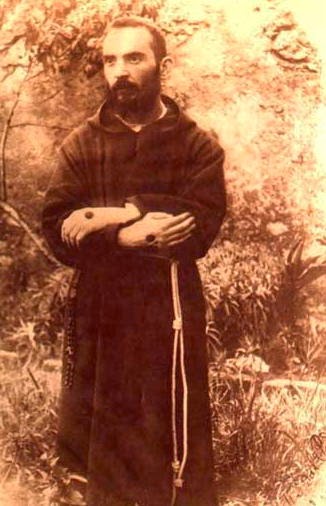 In many ways, Pio's life overturns the modernist denial of the miraculous and the numinous. He lived the impossible. The way in which he acquired the stigmata of Christ Jesus resonates strongly with the experiences of Saint Francis of Assisi and would test the imagination of even the most adventurous writer of fantasy. For Padre Pio, the inhabitants of hell-worlds were not the fanciful constructions of archaic myth-makers, but actual presences with whom he actively contended.

He possessed in great measure many of the siddhi, or perfections described in the Yogic literature of India. These included bilocation (the ability to be in two places at one time), visions, ecstasies, the ability to read the minds of others, powerful healings, luminosity, and the emanation of sublime fragrances. Yet he never claimed these manifestations as his own. He was truly a great priest of Jesus who lived a life of dedicated service and humility.

His mission was also marked by extraordinary works. The creation of the Casa Solievo Della Sofferenza, a large hospital constructed in San Giovanni Rotondo during the 1950s was driven largely by Padre Pio from within the confines of his monastery. Despite his accomplishments in both the physical and the spiritual realms, Padre Pio claimed no exalted status, but right to the end, remained surprisingly ambivalent about his own relationship with the Divine. His biographer C. Bernard Ruffin comments:


Incredibly, Padre Pio at times seemed to doubt that he was in a state of grace. "You have respect for me," he told a friend, 'because you do not know me. I am the greatest sinner on this earth." Complaining that every good intention was marred by vanity and pride, he insisted, "I am not good. I do not know why this habit of Saint Francis, which I wear so unworthily, does not jump off me. . . .  Pray for me that I might become good." [Padre Pio: The True Story, p. 373]

Such extraordinary comments made towards the close of his life cast the reality of relativity into sharp relief. Did Padre Pio hold dark secrets, or was he so conscious of the nature of perfection that the minor foibles which constantly assail everyone in the course of their daily lives became for him a source of great angst and self-recrimination? Perhaps the self-expectation of those who have truly transcended human limitation and who fully inhabit spiritual reality is beyond the comprehension of humanity at large. This attitude may perhaps also reflect the folly of complacency and hubris in considering one's own relationship to the Divine.

Padre Pio of Pietrelcina represents yet another remarkable enigma born of Italian Catholic spirituality. His life has served to reaffirm the deeper values of love, healing and transformation carried by deep Christianity during this broken time of materialism, nihilism and abuse that subvert and deny the essential truths taught and lived by Jesus of Nazareth.


A Prayer for Healers


O divine healer of bodies and of souls, Lord Jesus, Redeemer, who during your life on the earth cared for those who were afflicted and healed them with a touch of your all-powerful hand, we who are called to the difficult mission of healing honour you and recognise in you our sublime model and source of strength.

May you ever guide our minds, our hearts and our hands so that we may deserve the praise and honour bestowed by the Holy Spirit upon our vocation.

May there awaken within us a growing awareness of our role as your collaborators in the protection and the development of humanity, and of our role as instruments of your divine mercy.

Illuminate our intelligence in the pursuit of an understanding of the pain and difficulties caused by the numerous afflictions that can assail our bodies until, by skilfully availing ourselves of the findings of science, the causes of sickness no longer remain hidden to us. By your grace, may we be neither deceived nor mistaken regarding the nature of our patients' symptoms, but with sure judgement, select the best remedies or treatments that have been made available through your Divine Providence.

Fill our hearts with your love and help us to recognise your own self within our patients, particularly those who are most wounded and helpless. May we respond to the trust that they have placed in us with the utmost care and energy.

Imitating the example you have set for us, may we be parental in our concern, sincere in our advice, diligent in our ministrations, strangers to deception, and wise in our discernment of the mystery of suffering and of death. Above all, may we be constant in our defense of your sacred law of respect for all life against the assaults of our self-serving and perverse instincts.

As healers who give glory to your name, we vow that our activities will be continually guided by moral righteousness and that our lives will honour the laws of morality.

Finally, grant that we ourselves, through the Christian conduct of our lives and the just practice of our profession, may one day be worthy to hear from your lips the blessed words that you have promised to those who have ministered to you in the form of those who are in need: "Come ye blessed of my Father, inherit the kingdom prepared for you from the foundation of the world." (Matt. 26, 34)

(Translated from the Italian by Vincent Di Stefano)

A documentary examining the life of Padre Pio

1. In the Presence of the Transcendent. Giuseppe Caccioppoli and Padre Pio of Pietrelcina

The meaning of the life of Padre Pio cannot be fully encompassed by knowing his story or the range of his spiritual gifts. It is only in the context of his day-to-day influence on the lives of those who knew him and loved him that one can begin to form a coherent understanding of the man and of his mission. The reminiscences and stories of those who were close to him will provide far more light than any formal examination of the many available histories and commentaries that attempt to describe his life and detail his attributes. One such story is offered by Giuseppe Caccioppoli, a spiritual son of Padre Pio.
Posted by Vincent Di Stefano at 12:37 AM 2 comments: