On the Eve of Cancun 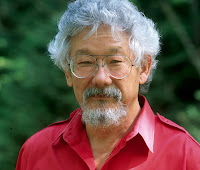 Every sphere of intellectual endeavour calls forth individuals who make it their task to assimilate, interpret and transmit an evolved understanding to those who may share their interests. This can happen at many levels. Some may choose to address groups of specialists through the pages of learned journals or through professional conferences. Others, such as the many dedicated teachers everywhere who daily pass on the light of learning to their charges, work less visibly. And there are certain projective individuals who will skillfully make use of the dominant media, whether print or electronic, to transmit their message as widely as they can. A few seem to be capable of spanning all levels, thereby making substantive contributions to the collective understanding of their times.

One such individual is Canadian environmentalist David Suzuki who has spent much of his life projecting his formed ideas through many theaters using a range of media. His far-reaching and enduring influence continues, even as he enters his eighth decade. Although recently retired from academic life, Suzuki remains relentless in his quest to identify and disseminate what he understands to be core ecological principles by which humanity can live during a time when many former certainties begin to progressively collapse.

Ironically, while Suzuki continues to spread his message, the present Canadian government remains obstinately obstructive in its refusal to reform or abandon environmentally destructive practices. The saying uttered so long ago, "a prophet is not without honour except in his own country" still holds true.

In a snap vote taken without notice and without debate on 16th November 2010, the Canadian senate defeated Bill C-311, the Climate Change Accountability Act, a modest piece of legislation developed over the past 5 years which aimed for a 25% reduction in Canadian greenhouse gas emissions by 2020 and an 80% reduction by 2050. One cannot accuse the Canadian government of inconsistency. This is a perfectly timed statement aimed at delivering an unequivocal message to the UN Climate Change Conference Summit which will begin in Cancun, Mexico on November 29.

Canada has for some years been widely perceived as engaging in a systematic sabotage of climate change negotiations. Even while campaigning for office in 2006, Stephen Harper had made it clear that he would terminate Canada's commitment to the Kyoto Protocol which had been signed in 1998. One of Harper's first acts upon election was to withdraw Canada's financial support for developing countries seeking to reduce their greenhouse gas emissions. Soon after, environment minister John Baird brazenly described Canada's Kyoto commitment as a "risky, reckless scheme."

These actions and rhetoric are largely driven by the Harper Government's commitment to the exploitation of the immense reserves of tar sands that are held in Canada, particularly in Alberta. Canada exports over one million barrels of oil derived from tar sands to the United States every day.

The extraction process is both energy intensive and resource intensive and requires two to three times as much energy as that required for refining crude oil. It consumes three barrels of water and lays waste two tons of earth for each barrel of oil produced. The tar sands project, which has been pursued in Canada since 1967, has been extremely damaging to the environment, contaminating both groundwaters and local river systems. It has already caused significant health problems, including an increased incidence of cancers and immune disorders, in communities living downstream from the mining operations.

Tar sands operations in Canada result in the production of 400 million gallons of toxic sludge daily, most of which is stored in numerous tailings dams. Polycyclic aromatic compounds are beginning to appear not only in nearby river systems, but in winter snow gathered 50 kilometers away from the mining operations.

The Alberta tar sands project has already claimed an area the size of England and has been described as the largest industrial source of carbon emissions in the world. In addition to the production of toxic sludge, an estimated 40 million tons of greenhouse gases are spewed forth into the atmosphere every year as a result of these operations. Little wonder that those who support such activities on "economic grounds" do whatever they can to destroy such pieces of legislation as the recently emasculated Climate Change Accountability Act.

Aside from the lobbying and disinformation campaigns of the mining and energy industries, Obama's unilateral demands, China's recalcitrance and Canada's obstructionism did much to effectively torpedo the Copenhagen Climate Summit in 2009. At the conclusion of the inconclusive and largely inconsequential climate talks last year, former UN Climate Chief Evo de Boer quipped: "Everything will be sorted out in Mexico next year." In a video interview with George Monbiot in December 2008, de Boer had presciently stated: "Copenhagen, for me, is a very clear deadline that I think we need to meet, and I'm afraid that if we don't . . . one deadline after the other will not be met, and we sort of become the little orchestra on the Titanic." A perfectly apt metaphor for the sad denouement of Copenhagen.

Unlike the Copenhagen Climate Summit which helped to mobilise the hopes and expectations of millions of people throughout the world in the preceding weeks and months, there has been an empty silence surrounding the coming Cancun talks. One has to look really hard to find any mention of it in the dominant media. Perhaps there has been a growing realisation that the governments of the world are incapable of mobilising the will to alter the patterns of production and consumption that have brought us to the present impasse. Canada continues to plunder its bituminous reserves regardless of the environmental cost. And Australia continues to export 250 million tons of coal and 10,000 tons of uranium oxide to whoever will pay for it.

While Ignatian methods call us to imagine the events from Gethsemene to Golgotha, and Vajrayanist methods instruct us to imagine one's lama seated upon ever-more-elaborate lotus thrones, David Suzuki urges us to imagine a future based on community and long-term sustainability and not on economic determinism and technocratic manipulation. In a talk given at the Kitsilano High School auditorium in Vancouver on September 17th, 2010, Suzuki demonstrates that he has lost neither the passion nor the clarity that have been his hallmark for many decades. He urges us to imagine a future where we live work and play in the same neighbourhood, where buildings and roads capture and store the energy transmitted in sunlight, where town and city roofs capture water for fruit and vegetable gardens, where asthma rates plummet because the air is clean, where cancer rates decline because the air, water and soil no longer carry numerous toxins. He concludes: "We have to get to know each other because we're all in it together. I believe communities are going to be the unit of survival."

The most important thing to emerge from Copenhagen last year was an understanding that the only change we could realistically hope for in the short term was that which emanated from the sustained commitment of ecologically conscious individuals, groups and communities.

Suzuki's wide-ranging and energising lecture was recently broadcast on Radio Ecoshock and can be heard here.